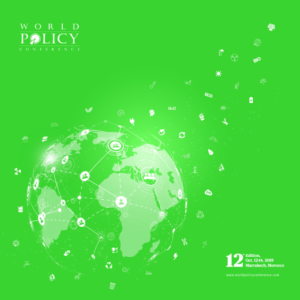 A little more than three months after the 12th WPC, whose report we are publishing here, developments bear out the trends that were the focus of our discussions in Marrakech. In the United States, Donald Trump only has eyes on his re-election in November and shows indifference to the loss of trust in his country, which is rising abroad, even and perhaps especially among his allies. The Chinese-American trade deal concluded in January should not be taken for granted. It is only a truce, and the Chinese will do their utmost to speed up their race towards technological independence and supremacy. Affected by the slowdown in economic growth, the protests in Hong Kong and the re-election of Tsai Ing-wen in Taiwan, not to mention the coronavirus epidemic, Beijing can only take a tougher line. The multiple effects of the ChineseAmerican rivalry are increasingly palpable in the rest of the world. NATO’s 70th anniversary summit in December 2019 loosened its members’ tongues about the future of the Atlantic Alliance, while the European Union, under the leadership of its new leaders, is hesitating on the new path to take now that Brexit has finally happened. And everyone is speculating about Great Britain’s geopolitical and economic options in the era of Boris Johnson.

In the rest of the world, popular protest is becoming more international, especially in the Islamic world, in Iraq, Iran, Lebanon and Algeria. Western indecision allows Russia to present itself as the chess master in Syria or to rival Turkey in Libya. Post-Bouteflika Algeria is raising all sorts of questions. But the country currently attracting the most attention is Iran. Worn down by sanctions and shaken by the killing of General Soleimani, it seems too weak to confront the United States head on. But, despite the grumbling of the population, the mullahs’ regime is not on the brink of collapse. It has not lost its ability to stir up trouble in the region. In this regard, and for other reasons with respect to North Korea, Washington is at an impasse. Meanwhile, Brazil and Australia are literally burning.

These are the realities at the beginning of 2020, when the international system more than ever needs to strengthen all its means of cooperation, in other words, what has come to be known as global governance. Faced with the Chinese-American stand-off and the risk of the whole international system degenerating, the middle powers can no longer afford to leave their fate in the hands of hypothetical protectors. Like it or not, they must clearsightedly deepen their own points of view in an attempt to influence events. This has been the WPC’s mission since its foundation in 2008.

Read my opening speech here. And read the full report of the 12th edition of the World Policy Conference on the WPC”s website here.

The World in the Next 30 Years

Covid 19: The Price of Negligence
Scroll to top