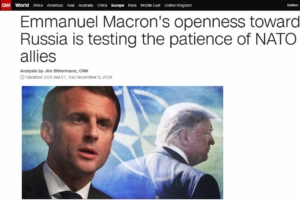 Paris (CNN) – Nobody likes to hear that an old friend is « brain dead, » so perhaps it’s not surprising that France’s allies seem to be going through the seven stages of grief over Emmanuel Macron’s pronouncement in the Economist last month that NATO is languishing.

There was first shock and denial. Speaking alongside NATO Secretary General Jens Stoltenberg on November 7, German Chancellor Angela Merkel said she disagreed with the French President’s description of the 70-year-old alliance.

« I don’t think such a sweeping judgment is appropriate, » she said.

Now in many quarters, leaders are stuck in the anger and bargaining stage. Turkish President Recep Tayyip Erdogan said Friday that Macron should « check your own brain death » before throwing stones at NATO.

Macron is no doubt hoping that a NATO summit and upcoming meetings on Ukraine will quickly move his critics on to the stages of acceptance and hope.

Macron wanted to provoke and he succeeded, although perhaps not initially in the way he might have hoped. France’s relations with Germany have taken a hit.

« In Germany when you say NATO is brain dead that breaks a taboo, » says Thierry de Montbrial, president of the French Institute of International Relations, a Paris-based think tank, in a reference to Germany’s instinctive dependence on NATO to be at the center of its foreign policy.

« From the point of view of military cooperation, NATO functions well, but there is no political vision and no strategic vision, » de Montbrial continued, in what has become a common criticism of NATO’s lack of clear mission since the Cold War ended.

« The armies are always at the service of politics and not the reverse, and that’s the way you have to interpret the vision of Macron. »

Macron’s message might have been ill received in Berlin, but in Ukraine and other former Soviet states, alarm bells rang even louder over the French President’s argument that the real threat to Western Europe these days does not come from Moscow in the east, but from terrorists to the south.

It is a notion with which de Montbrial agrees. « We are in a totally different world, the shadow of the Soviet Union is no longer a risk of the same nature…the principal risk is not an invasion into Baltic countries by Russia, it’s terrorism, it’s the danger we have on our southern flank for which NATO has no response. »

While Macron’s provocation was pointedly directed at NATO, it reflected a broader sense of urgency in the hallways of his presidential palace over more diverse geopolitical changes on the horizon. With the world rapidly dividing into two superpower blocks — American and Chinese — Macron does not want Europe to be forced into choosing one or the other.
As the President himself laid out in a rhetorical question to the French diplomatic corps last August, « Do we decide to become junior allies of one party or the other, or a bit of one and a bit of the other, or do we decide to be part of the game and exert our influence? »

In that same speech — less noticed than the « brain death of NATO » comment but, in many ways, more inflammatory — Macron restated what has become obvious to Europeans: that while the US is still an ally, it is no longer a reliable one.

He pointed out the ways in which Europeans — perhaps thinking of his German neighbors here — have fallen into a post-Cold War lethargy, fearing the same enemies and depending on the same old friends without considering changing circumstances, like, for example, the collapse of the Intermediate-Range Nuclear Forces Treaty, which directly impacts European security.

« We are in a Europe where we left the arms issue under the control of treaties that predated the end of the Cold War between the United States and Russia. Is that a Europe that thinks about its destiny and builds? » Macron said.

Macron has been urging his advisers to take another look at relations with Russia.

« He is not looking eastward as an alternative, » observed Francois Heisbourg, a special adviser for the Foundation for Strategic Research, told CNN, « But the Macron advisers are saying they want to revisit the relations with Russia. Note they are saying ‘revisit’ and not ‘reset,’ there is a difference. »

Heisbourg believes Macron is not naïve about Moscow and he says the French will wait for a summit they are hosting on December 9 to decide what future there might be in closer relations to Vladimir Putin. At that meeting, leaders of France, Germany, Russia, and Ukraine will once again get together in the so-called « Normandy format » to try to bring an end Russia’s war with the Ukraine.

At that point much attention will be paid to whether Putin brings anything real to the table.

With his broadside on NATO, openness toward Russia and other geopolitical questions, Macron is proving himself every bit as much of a disruptor as his American counterpart.

And at the same time he seems to be constantly looking for other ways in which Paris can find common cause with Washington, even if it is often for vastly different reasons.

US President Donald Trump seems to always have domestic politics and American isolationism in mind. For the 41-year-old French President, this is a chance to call attention to what he believes is the tunnel vision of fellow NATO leaders who lack his vision.

His condescension has not gone unnoticed by his neighbors, who angrily point out that for all of Macron’s rhetoric he has presented very few concrete practical suggestions for how to move forward on NATO or anything else.

But then again maybe that never was the point of his brashness. As Heisbourg points out: « Macron was an intellectual before he was a politician or president, and there is nothing he loves more than a good debate. »