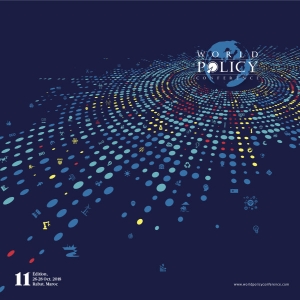 The World Policy Conference (WPC) aims to foster a more open, prosperous and equitable world. But that requires continuous efforts to understand the reality of the forces in play as well as their interactions and to think about how inter-State relationships can be peacefully organised at every level, while respecting each nation’s culture and basic interests.
In October 2008, the first WPC took place at Evian against the backdrop of the end of the caricatural ideology of liberal globalisation. Many economic and political crises have taken place in the almost 11 years since then, but none has spun out of control on a global scale. For that, we can be thankful. However, without being too pessimistic, there is reason to worry about the steady erosion of global governance. China is aware of the need for a world order based on rules, but wants to rewrite them in its favour. The United States is increasingly going its own way, taking a narrow, hard-line view of its national interests. Donald Trump weaponises trade and currency to further his aims. He is reaping the short-term benefits while failing to see that America’s foes or competitors will in due course adopt his methods, turning the tables on him and on liberal order. He has made insults a tenet of foreign policy, never missing a chance to turn up the volume. He ignores one of the most basic precepts of any government, i.e., that easing tensions is in its interests. If Trump behaves that way, little wonder populism and “illiberal democracy” are on the rise in Europe and elsewhere. Not to speak of authoritarian regimes, starting with China. Some add fuel to the fire by imitating him. Others capitalise on fear. Must we resign ourselves to thinking that when push comes to shove, the digital revolution will pave the way to dictatorship, either directly or through anarchy?
If the world order is in jeopardy, it is also because many countries, North and South, East and West, feel insecure about their identities. But the idea of national interest is meaningless in a divided country. The main paradox of globalisation is that, on the one hand, it implies an increasingly broad view of the national interest, in other words one that encompasses greater solidarity, while on the other hand, it tends to fracture political unity, rather than cementing it. The liberal democracies often look helpless in this context. Consequently, they risk losing their legitimacy in the face of illiberal democracies. Elites are rejected today because they are blamed for the systemic problems of contemporary democracies. Some people think democracy can be saved by promoting its participatory form. But not everybody can be Switzerland. And anyway, who wants it, besides Switzerland? If the idea of “collective intelligence” means anything, it is not that good solutions to the thorniest issues can emerge from any assembly formed by chance. That goes for international relations, the understanding of which requires maturity and a thorough knowledge of others.
Which brings us back to the WPC’s purpose. The participants in the 11th edition, in Rabat, praised the quality of the talks and speakers. The WPC primarily brings together leading figures who hold or have held senior economic or political positions. It is not a club of experts or journalists, although excellent experts and journalists take part in it. Its connection with Ifri is historic and does not mean it fits the traditional mould of a “think tank conference”. It is more like a club such as the Trilateral Commission or the Bilderberg Meetings — while avoiding the pitfall of secrecy — created during the Cold War. That is how I designed it.
Returning to the idea of collective intelligence and the conditions of its relevance, the WPC must pursue the goal of continuously improving the quality and composition of the community it constitutes. That will allow it to be increasingly capable of fleshing out good ideas, which the future world’s architects can turn into actions, provided they have the courage.

Russia, the West and the Rest
Scroll to top