You are here: Home1 / News2 / Stepping Into the 21st Century

Toward a New German Foreign Policy. Stepping Into the 21st Century 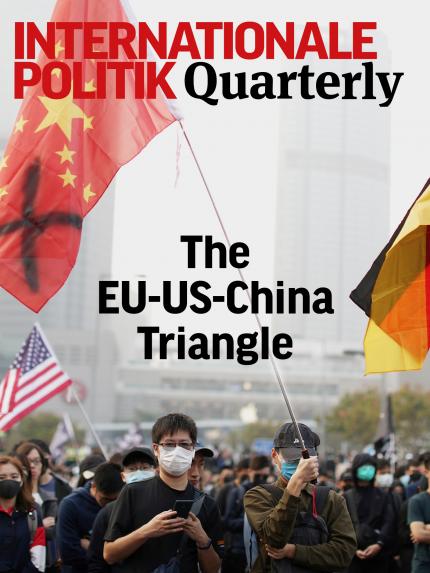 When Angela Merkel became chancellor in 2005, the world could still be called unipolar, at least at first glance. The geopolitical consequences of China’s rise seemed abstract. The issue was raised only in small circles. China’s leaders tried to seduce the West, which in turn was preoccupied with how it could benefit from the new division of labor. In fact, the West viewed China mainly as a huge pool of cheap labor and an almost inexhaustible outlet for its products. That is why China was admitted to the WTO. The idea that the Chinese were taking advantage of the West’s ambient liberal ideology to methodically implement a power policy, based on acquiring technological world leadership, did not worry Westerners much, who thus showed themselves mainly interested in the short to medium term.

Moreover, after the dark decade during which the Soviet Union collapsed and the Russian Federation almost fell apart, the return of a strongman in the Kremlin gave NATO a new lease on life at a time when the European Union was quickly expanding and its new members were turning to the United States to guarantee their security. The rejection of the treaty establishing a constitution for Europe by the French (and Dutch) people automatically bolstered American hegemony over a West that still wanted to believe in the end of history.

Such was the international situation in late 2005. After Helmut Kohl, who left his mark on German reunification, and Gerhard Schroeder, who had to manage its costs, Angela Merkel inherited a strong Germany intent on becoming the leading power in a European Union transformed by the end of the Cold War. It also was more Atlanticist than ever, despite what was called “Gaullo-Mitterrandism,” whose last manifestation was France’s opposition to the 2003 invasion of Iraq. Germany, Belgium, and Luxembourg also voiced their opposition in their own way (getting together at the outskirts of Brussels for the so-called “praline summit,” or Pralinengipfel).

Merkel’s 16 years in office saw a transformation of the world to which she adapted on a day-to-day basis, using her outstanding talent to put the pieces back together after each crisis that erupted following her accession to power. That was the case with the eurozone bailout during the financial crisis in the 2010s following the “subprime” loans debacle in the United States. It was also the case with the migration crisis after the “Arab Spring” debacle (which also helped fuel the rise of the far-right Alternative für Deutschland, or AfD). It was again the case with Brexit and even the COVID-19 pandemic.

All of these circumstances tested the European Union, which emerged a bit stronger each time—at least in the short term. Meanwhile, Chancellor Merkel turned a deaf ear to US President Donald Trump’s provocations, staying true to form: waiting, watching, and making the right gestures as late as possible. Has she understood that Trump’s 2016 election was not a bump in the road, but the most conspicuous sign of deep changes in American society and a shift in the world toward Asia, especially China? Does she believe that Joe Biden’s election (thanks to COVID-19) heralds a return to the reassuring American protectorate of yesteryear, beyond its rituals, like the annual Munich Security Conference? Candidates hoping to take her place are asking themselves these questions now. Their answers will largely determine the future of Europe and beyond.

The Late Start of the 21st Century

The 2007-08 financial crisis and the rivalry between China and the United States are what really ushered the world into the 21th century. Like it or not, the Cold War era’s Atlanticist doctrine is outdated. The geopolitical balance of power in the classic sense of the term still matters, but geo-economics has considerably increased its complexity. The fight against global warming is shaking up energy policies and raising many technological challenges. The great powers increasingly resort to sanctions.

The clear trend toward de-globalization is less a drastic reduction of interdependence than a ruthless struggle for control of critical areas with raw materials and strategic products (like semi-conductors) and, more generally, supply chains. Even more fundamentally, the reshuffling of political and economic might will depend on who controls data acquisition and use on a planetary scale. Each country, but also the European Union if we take it seriously as a political unit under construction, will weigh what its military-digital-industrial complex is worth.

The End of the German Model

Since World War II, Germany has built up its power by taking full advantage of the US protectorate for its security. Depoliticized international trade has benefitted its economy in general and its automotive industry in particular. Those days are over. This means that the future chancellor will not be able to sidestep the issue of redefining Germany’s economic model and the future of its security as an inseparable whole. Terms like “European strategic autonomy” can sometimes be frightening. However, faced with the United States’ desire to restructure the Atlantic Alliance to checkmate China, Germany will have to make real choices. No one can indefinitely hide behind a smokescreen of outdated vocabulary.

These will be security, economic, and technological choices at the same time. In theory, Germany could dream of becoming a great Switzerland or breaking the Sonderweg taboo by taking a particular path, which would push it to broaden its relations with Russia and China, already well advanced on the strictly economic level. The Nord Stream 2 pipeline is the symbol of this when it comes to Russia, and the reliance on its exports, notably automobiles, when it comes to China. But how far can Germany go it alone in this direction? Conversely, how far can it accept further increasing its dependence on the US? To what extent can it avoid directly facing the issue of boosting its military capabilities and the suspicions that such a step would inevitably arouse? How far can and will it go in this area within the European framework?

Obviously, no single individual, nor even a political debate within a coalition, can answer these questions. They will necessarily also be answered by in-depth discussions between Germany and its European partners, starting with France, with which it forms a community of destiny. Public debate will play a key role, for so many taboos lie behind all these issues. But in this sea of uncertainty, one truth stands out: although Angela Merkel will have held office between 2005 and 2021, she will remain the last German chancellor of the 20th century.

Now the 21st century in terms of international politics has truly begun. As Germany has become Europe’s leading power, its choices in the coming years will be decisive for the future of Europe and, by extension, of the international system as a whole in the next 30 years.

The article was published on  Internationale Politik Quarterly website on March 30, 2021.

Towards the second crusade?