You are here: Home1 / News2 / Speeches3 / 11th edition of the World Policy Conference 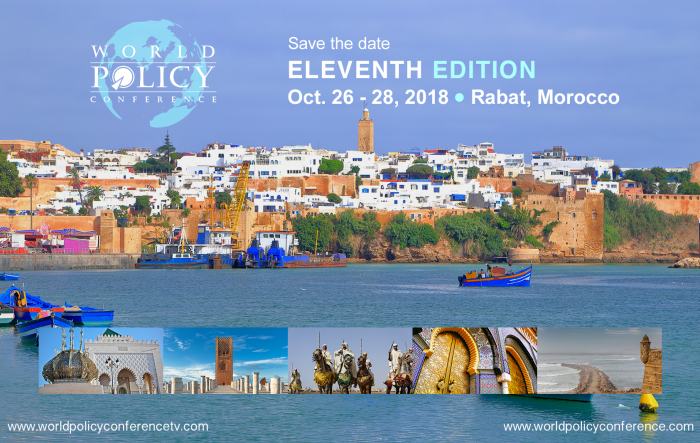 Founded in 2008 by Thierry de Montbrial, Chairman of the French Institute of Foreign Relations (Ifri), the World Policy Conference (WPC) held its eleventh edition from October 26th to 28th, 2018, in Rabat, Morocco.

The WPC’s mission is to reflect upon and to come up with solutions to the constant upheavals of our contemporary world and to create lasting bonds between the participants. This international conference gives a voice to political, economic, academic and media players from over 40 countries – from major powers to medium and small countries, including emerging countries, thus ensuring a diversity and plurality of debates.

The event has become a not-to-be-missed forum on the global governance agenda and has ranked 3rd best Think Tank Conference in 2017 according to The Think Tanks and Civil Societies Program (TTCSP) at the Lauder Institute, University of Pennsylvania ‘2017 Global Go To Think Tank Index Report’.

More than 250 international leading figures will participate , including :

The following topics will be discussed:

The work of this eleventh edition will also cover issues such as international trade, education, development in Africa, energy and climate , the state of the world economy and many further topics.